Pictured above is the front of the Wharenui.

Below is a close-up of some of the carving that features Tangaroa  the "God of the Sea."

Who were the first inhabitants of New Zealand?

Current beliefs, based on genetic, archaeological and linguistic data suggest that Maori are the descendants of voyagers who originated in South East Asia, leaving some 5000 to 6000 years ago and slowly migrated down through the Pacific Islands of Micronesia and Melanesia, finally arriving in these islands via Samoa and Rarotonga in a series of voyages in ocean-going waka or large and very fast outrigger canoes.

When did they arrive?

Tradition and archaeological evidence has it that the main migrations took place over generations somewhere around the year 1200 as the voyagers ventured back and forth across the wide expanse of the Pacific. They were expert sailors and navigators, as you can imagine, navigating across the vast open expanse of the Pacific unerringly by the stars, bird migrations, cloud patterns and wave patterns that they had learned to observe in minute detail. These voyagers sailed first downwind, discovering and populating Tahiti and Hawaii before turning to the more difficult task of sailing across the wind to the Southernmost point of their migration – Aotearoa. The late New Zealand historian Michael King had this to say about these voyagers:

“These voyages, ranging around more than half the globe at a time when Europeans had not yet ventured beyond the Mediterranean or the coast of their continent, were analogous in daring and accomplishment to the later exploration of space. Insdeed, the Pacific Ocean, with its widely spaced islands dotted across a vast surface, was a kind of terrestrial mirror for the galaxy, the Milky Way, which provided Polynesian sailors with stellar markers for celestial navigation.”

What did the first inhabitants call this place?

We do not know what they called this place they discovered, but being island people, they undoubtedly recognised this place as being composed of two main islands.
Artefacts collected from both the South and North islands indicate that they travelled extensively over both places.
Tribal histories suggest what they called the North Island Te-Ika-a-Maui (literally “The fish of Maui”), and that they called the South Island Te Waka-a Aoraki - “The Waka of Aoraki” or Te Wai Pounamu - “The Place of Greenstone” (much prized as a material for making weapons and carving), rather than the more recently accepted Aotearoa – “Land of the Long White Cloud”. 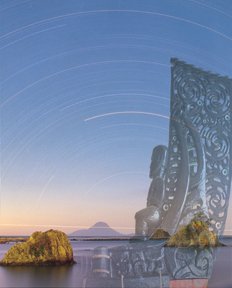 Did they all come at the same time?

Maori tradition has it that they came in several fleets, and that each waka contained the ancestors of the different tribal groups that make up Maori culture.

These groups came in waka bearing names that are still identified with the major tribal groupings: Tainui, Mataatua, Arawa, etc., as well as other names, handed down in tribal oral traditions: Takitimu, Aotea, Horouta, Mamari.

The occupants of these waka quickly dispersed, populating the entire country and forming separate but overlapping tribal groups and confederations.

The occupants of the Mataatua waka, which landed in Whakatane, for instance, now make up a number of separate but related groups: Tuhoe, Ngati Awa, Whakatohea, Whanau a Apanui, Ngai Tai, all claiming common ancestors from the Waka.

Where did they arrive?

The landfall of the first settlers seems to have been along the East Coast of the North Island – the Coromandel Peninsula and the Bay of Plenty. Evidence seems to indicate that although the schoolbook stories of a Great Fleet is probably mythical (and invented by early European anthropologists), the migrations did happen in phases which included fleets of several waka. They brought with them their traditions of whakairo (carving), raranga, (weaving), taa moko (tattooing) and their traditional waiata (songs) and karakia (prayers). They also brought the kumara, and the kiore (Polynesian rat) which proceeded to decimate the native (and unprotected) bird population.

What happened to them?

The descendants of these original voyagers are still with us today – the Maori, who continue to speak the language of their ancestors and to carve and weave their stories like those of almost 30 generations past. Although they are now part of Modern New Zealand, they maintain their proud culture and heritage which they are willing to share with us, and with new visitors to these lands.