Since the arrival of Captain Cook and Joseph Banks the names of significant sites and environments have been systematically renamed after British dignitaries and places. Mts. Cook, Egmont, and Edgecumbe being but three of the most obvious. Maori names have been expunged from almost the entire landscape of Aotearoa-New Zealand and along with them much of great historical and spiritual significance. Maori place names were redolent with history and spiritual significance that was erased along with their name usage. A significant purpose of our Cultural Tourism pages will be to support the reclamation of that lost history and spirituality for Maori, and to share it with tauiwi (newcomers).

Modern development and farming practices, driven by western ideologies of progress and land acquisition and ownership have had the effect of marginalsing these earlier relationships.

In the 21st Century, we are now beginning to witness the unsustainable nature of these ideologies and practices, and to realise that care for Papatuanuku (Mother Earth) is an essential prerequisite for continued human existence.

Despite its “clean-green” image, New Zealand, along with many other nations, is beginning to experience the effects of global warming, contaminated aquifiers, polluted rivers, streams and lakes and depleted fish stocks. One of the features of our Cultural Tourism pages will be to promote the introduction and growth of knowledge and aspects of kaitiakitanga to tauiwi. 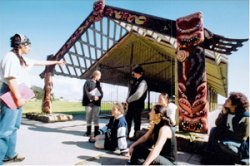 The history of New Zealand Tourism has been that visitors to Aotearoa-New Zealand have left these shores largely ignorant of Maori history, culture, customs and traditions, and often with a sanitised understanding of the real cultural relations that animate life in Aotearoa.

The view of Maori that they have taken away with them has been largely a romanticised image which devalues the actual lives and stories of the tangata whenua. It is a truism that recorded history is invariably the history of the victors, and this is no less true in Aotearoa-New Zealand than anywhere else. The recognised and recorded history of Aotearoa has, for two hundred years, been a non-Maori history of this place, seen through pakeha eyes and recorded through pakeha media.

Where historical events have been mentioned, they have largely been sanitised for general consumption, masking in the process the true history of colonisation and its actual impact upon Maori down to the present.

In addition, the portrayal of a nation’s history to visitors plays a fundamental role in any culture. It speaks to the world of the exploits and lives of its citizens. Yet though Aotearoa possesses, in both Auckland and Wellington a large collection of Maori museum artefacts, these artefacts are generally stripped of their historical significance.

The large (and largely inaccessible) collections in national museums has much the same impact upon Maori hapu and iwi that the Warehouse does on the local dairy – depriving them of the opportunity to exist within their own terms, to serve their own as well as community needs and to capitalise upon their own historical assets of material production. It will be one of our aims, through the support of small-scale, local ventures to gradually decentralise the tourist system, to redistribute the capacity for history-telling throughout the Maori community, and to ensure that the telling of the Maori story is in Maori hands.

Maori culture is one of the identifying cornerstones of the New Zealand experience for overseas visitors. Yet many of them leave without any real experience of this culture – of the spiritual beliefs and traditions, of the reality of manaakitanga. This is because many encounters with Maori are largely shaped and dictated by non-Maori and are required to fit within the framework of expectations that are shaped by other criteria than ones in which Maori society functions. Many “cultural experiences” are marked by a distance and superficiality that prevents true dialogue – for to be sure “tourism” is but a convenient but inadequate description of the desire to learn about and know the Other.

One of our central philosophies concerns the need to encourage the development of dialogue between visitors to Aotearoa and members of the Maori community – to allow for exchange of experiences, and to encourage a real learning to take place.

Our Cultural Tourism listings will attempt to promote and support particularly those Maori tourism operations who incorporate tikanga Maori into their operations, who hold fast to the belief that tikanga is tapu, inviolable, and that it is and should remain a central component of every encounter involving Maori in Aotearoa.

The (intelligent) interactive traveller has been identified by the NZ Tourism Board as being interested in the culture and history of the country and interacting in a meaningful way with its inhabitants.

They are travellers who seek out new experiences that involve engagement and interaction, and they demonstrate respect for natural, social and cultural environments. Our Cultural Tourism pages are targeted at this traveller.