Home > Info > Articles and Resources > Panadol for Guilt: The Industry of Hedonism and the Organic Explorer
By Allan Baddock 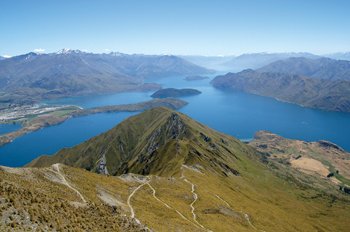 Here is something I wrestle with on a daily basis.

How do we reconcile the human thirst for exploration in an age in which the cost of exploring threatens our very survival?

There is something deeply insidious in the attitudes that currently guide much travelling. I picked up an in-flight magazine yesterday that trumpeted the values of Wanaka – that once most golden corner of Central Otago. Few places are dearer to my heart. It is the reason I returned to New Zealand; the reason I live in the South. “Wanaka has one of the most beautiful positions in New Zealand, sitting on the shores of Lake Wanaka, looking out to Mt Aspiring National Park. It is surrounded by stunning landscapes: braided rivers, mountains and valleys, a landscape of blasted tussock and craggy bluffs.” (pictured)

That’s how the magazine described it.

I have holidayed there since I was six. Had the in-flight mag known the area in those days, the writer would have added “empty”. Vast glaciated terraces and valleys where neighbours drove to see each other. The landscape around Wanaka is the resting place of my soul. Nowhere makes me sadder. And the reason was etched in two simple lines in that Air New Zealand in-flight mag. Noting Queenstown was long ago overrun by the jet-set, the magazine noted Wanaka, just 40 minutes away, was once “where New Zealanders escaped to.”

“It couldn’t last, of course.”

That is the venom of tourism: the assumption that every place shall and should be opened to visitation, the unquestioned acceptance that the most valued of treasures must eventually fall to the avarice of newcomers. It is so unquestioned that even the Department of Conservation, the anointed national guardian of natural treasures, includes in its mission objectives the increase of visitor numbers to remote and wild areas. Amidst talk of limits to growth, few are yet bold enough to consider saying go no further. Fewer still prepared to say “I won’t go.” Yet that’s where it starts. Like a single plague cell that penetrates our body’s outer defences, the first tourist anywhere opens the way to others – unless we are that most unusual of the species: a tourist who tells nobody. Our intrusion into a realm is only ever a precursor to others and to more.

It seems unrealistic to advocate eliminating tourism – much as it might be argued that the best care for the environment would be not to travel. Why is human travel any less a part of the planet’s ecosystem than the territorial and survival behaviour of any other migratory species or organism? It’s not. But the unsustainable nature of exploration has been hidden behind the availability of fresh horizons. Although migration has been a constant through human evolution, that remains merely a blip in time. Many island species have been forced to curb their wanderings at the shore and adapt to a contained life. (Japan’s inward looking society is a result.) Many have not adapted and have perished. The gaunt statues of Easter Island are left to remind us. The entire human species lives on a planet island floating in space. We may have travelled for aeons, but we have just reached the furtherest shore.

Wanaka has been discovered. It is now a tragedy of characterless urban sprawl. Aside from the mountain view, a person may as well be in suburban Auckland.
Until we question every journey, that’s how it will be. Until we consider “no” an option, that’s how it will be. The number of New Zealand’s wild areas closed to corruption is tiny. Adams Island in the Sub Antarctic springs to mind. A handful of others are considered so critical to endangered species rescue that the authorities take a stand. So, so few. Adams Island is one of the rarest places on Earth: a land that has never known mammalian predators. Bellbirds nest on the ground. Normally flighted birds go flightless. Nocturnal ducks cavort in daylight. No rats, no cats, no stoats… no people.

The operators in this book, by and large are people attempting to live a sustainable lifestyle – similarly sharing their knowledge and experience with others. That has benefits. As well as the organic growers and retailers, there are many small ‘mom and pop’ places incorporating environmental projects, and accommodating tourists and volunteers in a way they can keep their projects alive and make a difference. Any number of environmental trusts around the country accept tourists and ecotourism to fund their projects. People who care, have to find ways to sustain their work, or the world is left to the rich careless. Sustainability needs to include being economically sustainable, and tourism on a small scale, local level employs communities.

But the quest for sustainability hides a challenge. Laudable motives can blind us to actual effects. What is promoted as addressing the environmental impacts of tourism, so-called “eco-tourism”, seems to me too often just panadol for guilt: a way of dulling the awareness of the damage we’re doing by cloaking it in worthiness: sight-seeing in wildlife habitats instead of cities; or draping the lodge in untreated timber – never mind that by its presence the lodge draws tourists into the once quiet realm and that both locations would be better off without us. Community employment is also not good at all costs. Desire to sustain communities was once used to justify logging native forests, draining wetlands for farms - and even, if we care to go there, people trafficking and the slave trade. The issue comes down to net effects.

To give but one striking example: the Galápagos Islands - often portrayed as an evolutionary laboratory and offering among the last ecosystems on the planet unmodified by human touch - are an icon of the “tourism as conservation” ethos. In 2006, 140,000 people visited the archipelago. To serve those visitors a resident population has grown to 30,000 people, some say 40,000 – increasing nearly fourfold in less than 20 years. With the people has come an exponential increase in invasive insects, and now scientists report finding a parasite which devastated endemic bird species in Hawaii with avian malaria.

Much of eco-tourism seems in fact little more than selfish tourism: premium-priced enticement to venture down the road supposedly less travelled… to go where fewer have been… where things are “untouched”. What really seems to be being sold is “get it before others do”. Ecstasy mixed with our guilt relief: eco and exclusive… It’s a potent lure. The challenge for the organic explorer is to find ways to introduce - as one friend put it – some modesty to tourism: to curb our appetite; choose carefully; to think beyond the shallow; to go not where few have gone, but where we truly have least impact.

I prefer the idea of reintroducing awareness – because it seems to me that we are currently drugging ourselves with pleasure, and the drug of pleasure dulls the senses…lulls us to overlook. It makes us ignore the impact of numbers; of the vehicles we have used to enter the “unexplored” realm; of the encouragement we give to others; the impact that the comfortable lodge with the glorious views over the “pristine beach” has, simply by being there, drawing traffic to a locale made special by the absence of traffic. Eco offsets – such as planting trees to make up for our airline fuel – diminish the environmental burden of our pleasure seeking, but we shouldn’t be fooled that token contributions to the global situation make up for immediate and dramatic local impact. Two people a day traipsing through a delicate wetland wears a trail that isn’t remedied by any amount of tree planting on some distant recovering farm. And a trip to a native village doesn’t correct it either. No amount of good time; no exalted uplifting by contact with nature or culture overrides such costs. The pleasure drug – even in an eco blend – too easily dulls us to the reality that as soon as we create a trail to an untouched treasure, we sow the seeds of its destruction. I’m not excepting myself from the problems. I travel. I report. I use planes to get places. Does that mean I shouldn’t question their use? Am I supposed to take a panadol and not notice that what I am doing is having bad effects?

The answer has to be to travel with our minds awake; to be aware; to travel with real care through the landscape. We’re all out there trying to do great things, but the challenge for the organic explorer is to beware of falling into the trap of doing what looks good from one angle but has hidden aspects. To me, that means being conscious that every trail you beat extends an invitation to others to follow. If you truly value something, lead where you want others to follow, or go not that way at all.

If you can’t be conscious of the truth of what you’re doing and feel comfortable, maybe don’t do it.

Editor’s Note: There is an ideology, hidden behind much of our interest in environmental conservation. Why do we want to preserve species diversity? Why is the preservation of the environment so important? Măori say that it is to preserve these things for future generations – kaitiakitanga. We are caretakers not owners of the earth. The notion of stewardship resonates with the need to ensure that our childrens’ children have a peaceful and bountiful world in which to live. But there is another ideology behind the notion of sustainability. It is the presumption that the rest of the universe exists only to satisfy our human gratification – that it has no intrinsic right to existence. And this is a belief which is perhaps closely related to our current voyeuristic understanding of tourism.

Tourism, in our modern oil-rich world has become something other than the desire to know and experience that which is other – it has morphed into an industry upon which many national economies depend for their survival. This dependency, with its need to “sell” a place or an experience to a paying public leads to some complex contradictions for both the industry and the individual. Here, Allan Baddock casts a critical eye over the ideology of Sustainable Tourism, asking if it is not in fact a self-negating concept.