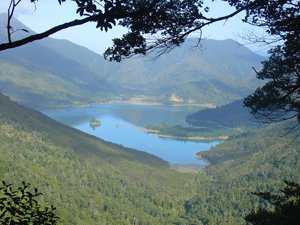 In 1995 in their continuing bid to rid New Zealand of its possum pests, the Department of Conservation (DoC) dropped 1080 poison over a targeted area in the Marlborough Sounds. Early the next morning a number of concerned local residents went for a walk in the area; among them were Steve McCellan and Bine Witte.

“There was just silence,” said Steve. “It was as if the bush had gone into a state of shock. The dawn chorus should have been in full swing but there wasn’t even a fly buzzing. We all saw 1080 pellets in the streams and dead animals on the tracks; the only noises we could hear were trees creaking in the wind. Weka disappeared from the bay that day and it was eight years before they returned.”

They realised the 1080 had killed far more than just possums and made it their mission, not only to stop the dumping of poison into the environment but, most importantly, “to offer a working alternative using non-toxic, humane methods.”

Common Bush-tail possums were introduced to New Zealand by European settlers who wanted to establish a fur industry, but, without any natural predators, their numbers skyrocketed. Their current population is estimated at 70 million and they devour seven million tones of vegetation a year, particularly broadleaved species like the Northern rata. The structure of New Zealand forests is changing because the trees the possums don’t eat replace the rata and take away a vital food source for birds such as kaka and tui.

Authorities introduced 1080 to New Zealand in the 1950s and DoC believes it is currently the best method of keeping the possum population under control. It has been furiously debated because of serious concerns about the amount of damage it causes to non-target animals and the environment. Opponents say it is inhumane, contaminates the ground and waterways and contradicts New Zealand’s claim to be ‘clean, pure and green.’ 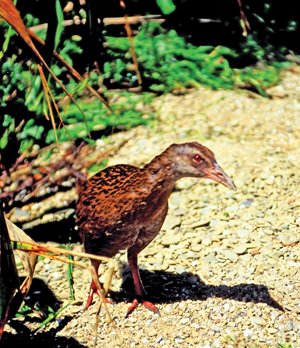 As Steve and Bine sat in the silence of the 1080 aftermath, they began to develop a concept which would enable them to protect their land in Nydia Bay (Pelorus Sound) from further 1080 drops. They called it All Profits to the Environment (APE). APE is a business whose sole aim is to compete with current profit-focused practices of business but in an environmentally sustainable manner, with any profits being used to fund environmental projects. Their first plan for APE was simple: to design and build an eco-friendly backpackers/campground half way along the Nydia Track, a two day tramp which passes through their land, and use the profits to employ full time possum trappers as an alternative to the aerial 1080 drops.

Activities at Nydia Bay started on a small scale. They had a “5-knot shack” (named for its naturally occurring air-conditioning) and some grass areas for tents, but over the last 11 years, with the help of hundreds of conservation-minded volunteers from all over the world, they’ve built Te Mahoerangi Eco-Lodge and presented it as a “gift to all from the gifts of many”.

Cat Allen, a National Park ranger from California, had been volunteering there for two weeks, “I love the way they practice things here it makes you really think. I’ve learned it’s easy to compost, sort and recycle garbage; it’s easy to be self-sufficient and less excessive; and it’s much better to work with, rather than fight, the environment.” Mike (known to all as Millie), a jack of all trades from Southland, volunteers himself as a kind of environmental janitor for the project. “I’m proud of what we’re achieving,” he said. “It’s meaningful. It has clear objectives and like all of the most powerful things, it comes straight from the heart.”

In 2005 when DoC informed the Nydia Bay community of its intentions to do another 1080 drop, there was outrage. “The local community got together and met with DoC at the Nydia Bay Lodge and we offered to undertake the task ourselves at no cost,” Steve said. “As result of the meeting, we tendered for and won two DoC contracts to clear the bay of possums. We were able to pay full-time possum trappers to systematically work across the land and, although the work took months as opposed to the couple of days it would take for DoC contractors to drop the 1080, we reached the necessary DoC required test levels and, as an added bonus, were also able to gather data as to possum numbers, sex, age, colour and condition.” 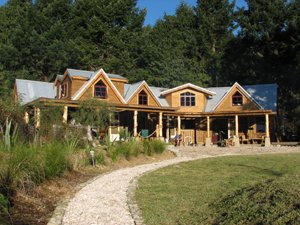 The possum campaign continues to be a success. They now have two to three full-time experienced possum trappers methodically working across 3000ha of land, laying lines, bating traps and catching possums every day. Their success rate is measured by DoC levels of acceptance for clearance and, “not only have we reached this level,” Steve said, “we’ve taken it to new record lows.” This was recognised in 2005 when they won the accolade of the most successful anti-1080 poison campaign in New Zealand from the Stop 1080 Poison Organisation.

They achieved it. An eco-haven in an area free of 1080 since 1999 which they can truthfully claim is clean, pure and green New Zealand. “Our solution is a win-win from all angles,” Steve said. “The environment is not being polluted; only the target pests are killed; it’s more humane; trappers can subsidise their income by selling the possum fur and it’ll be a future employment generator. We’ve now demonstrated an alternative to the use of poison which I believe, with variations, could be used successfully nationwide.”

“And it won’t stop at possums,” Steve continued. “The aim is to get to the point where possum trappers are trained as general pest trappers and are killing stoats, wild cats, rats, German wasps and any other environmentally damaging pests. These are long-term and labour-intensive methods, but it’s the only environmentally-friendly solution and therefore, in our current environmental predicament, the only solution.”

“It soon became clear that the APE concept could apply to any type of business,” Steve explained. “So we set up the Mahoerangi Environmental Education Trust (MEET), the charitable trust through which APE profits are channelled to the environment.” These profits are distributed through wages, training, equipment, education and research and already the Trust’s aims have received recognition from E.O Wilson’s worldsanctuaries.com and a BBC World Challenge nomination. In order to fully devote themselves to MEET’s next big challenge, the creation of Whareatea Wildlife Conservation Sanctuary on remote D’urville Island, Steve and Bine had to sell Te Mahoerangi, but happily the reins have been picked up by David Hausman and Sarah Watson, the engineer and bosun of the Rainbow Warrior 2 (Greenpeace). Steve and Bine are absolutely thrilled that Te Mahoerangi’s philosophy and APE aims will continue to be upheld. “We always said we would pass her on to those who can do better than us.” Steve said, “and we believe Sarah and David will take her to the next level.”

Whareatea Wildlife Conservation Sanctuary on D’urville Island is a hugely anticipated APE project that will start with the construction of an environmental education facility/village offering environmental care training and then extend activities to care for the surrounding 20,000ha native reserve. Among other ideas, they aim to offer training in pest control, seed bank development, permaculture, composting and eco-housing design and build. “With the help of internationally acclaimed eco-architect and permaculturalist Graeme North, we hope to have base camp up and operational for visitors by New Year, so watch this space!” Steve said.
The 1080 debate continually resurfaces in New Zealand, most recently in July 2008 when seven kea died after eating 1080 at Fox Glacier. The endangered and protected mountain parrots were being monitored by DoC in order to measure the impact of the poison. A DoC draft internal report outlined that “aerial 1080 may well be a significant threat to the kea population” with some drops “probably devastating,” and as a result, DoC is reviewing its use of 1080 near kea habitats. Nicola Vallance from DoC said obviously they are disappointed with the situation but “what is more frightening is to learn that 40% of kea nests are being wiped out by predators including possums... so we can’t afford to do nothing.”

The debate goes on, as do the 1080 drops in other areas. DoC senior adviser Herb Christophers said, “with no viable alternative in sight in spite of many years of research, the use of 1080, under strict guidelines, will continue to be the saviour of native species and habitats.”

“There is a viable alternative,” Steve said. “We have proved it. We believe it’s time to look at the big picture. People are disillusioned with all the damage we are doing to our environment and are actively looking for new ways to live. APE business opportunities are unlimited and could pave the way for a New Zealand future with conservation and the environment, quite rightly, at the centre.”

Check out www.nydiatrack.org.nz to learn more about the projects and how to MEET the APEs in the Marlborough Sounds.

Editors Note: The above is an updated article that Penny previously had published in Wilderness Magazine (www.wildernessmag.com). More recently, one of our Organic Explorer subscribers had this to say:
“We have just been watching a falcon patrolling the valley close to the Lodge and a flock of six kaka. The Moeraki Valley is the last easily accessible valley in South Westland with all these rare birds including about 15 pairs of blue duck-whio breeding busily in the headwaters (and a golden kea!). For 15 years at three year intervals DoC have treated the whole very rugged valley with systematic 1080 aerial treatment. It has worked brilliantly. The fuchsias and mistletoes are all very healthy as of course are the birds. It is very rugged landscape here. There is no way that anyone will trap or hunt the possums let alone rats and stoats. I run bait stations for the rats in the most accessible forest around the Lodge for about 2km diameter and that is effective but it does require about three hours a week. There is no interest whatsoever in anyone doing any trapping (a very cruel practice) or hunting in any of the rugged parts of the valley ... and no one hunts rats or stoats.”

On the other hand, for the last two years, Johan Groters and Joyce Kolk of Wairaurahiri Jets have been asking their clients to sponsor stoat traps along the Eastern bank of the Wairaurahiri River. So far their 76 traps have caught 188 stoats and 45 rats. Locals are already reporting a noticeable increase in birdsong, attributed to the sponsored traps.

We all agree that it is important to moderate the damage done by introduced species. How this ought to be done is the matter upon which we differ. DoC continues to advocate and defend its use of 1080. In this it is supported and influenced by the New Zealand farming lobby which sees possum-carried bovine tuberculosis as a major economic threat. It is important to note that DoC is also supporting local businesses like Mahoerangi and Wairaurahiri Jet on alternative methods. On the other hand, examples like these may point to a new paradigm which relies not so much upon imposed centralised and uniform policies, but upon local initiatives, knowledge and labour linking tourism directly to the economies of conservation and sustainability. Unless we change the methods we have used thus far, we will continue to get the same results.