New Zealand Bird Sanctuaries. Diverse and prolific birdlife is a unique feature of New Zealand’s coastal, forest and alpine environments - even in the major cities where bird song frequently interrupts the urban buzz. 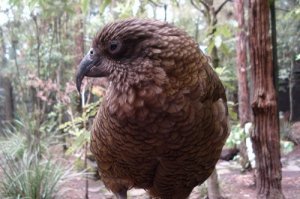 For as long as humans have inhabited these islands, birds have been their constant companions.

Birds held a special place in the folklore of New Zealand Maori, who believed the graceful winged creatures to be messengers from the spirit world.

Captain Cook - who first visited New Zealand in 1769 - remarked on the deafening volume of bird song in the forests.

Once a predator, man is now the major protector of New Zealand’s avian species. Some species have disappeared but almost 200 documented bird species - terrestrial, coastal and oceanic - are found in New Zealand today.

Sanctuaries and conservation reserves throughout the country provide havens for protected bird populations where they are bred and nurtured. These sanctuaries also offer unique and accessible wildlife experiences for visitors wanting to observe New Zealand birds in their native habitat.

Many endangered birds and reptiles have been transferred to safe havens away from the mainland, such as the islands of Tiritiri Matangi and Little Barrier in the Auckland region, and Kapiti, near Wellington or mainland eco-islands such as Maungatautari - in the Hamilton Waikato region - and Orokonui - in the South Island’s coastal Otago region.


This list of sanctuaries - in alphabetical order by region - covers some of the most popular visitor destinations.

Tiritiri Matangi, 4km off Auckland’s east coast, is one of the most successful conservation projects in the world, and provides a pest-free habitat for a number of rare and endangered species.

More than 20,000 visitors take a ferry or private boat to Tiritiri Matangi each year to walk the tracks populated with abundant wildlife including some of New Zealand’s most tuneful forest birds - rare takahe, kokako, saddleback /tieke, stitchbird / hihi and North Island robin.

The 307ha Orokonui Eco-Sanctuary - 20km north of Dunedin - is restoring an entire forest ecosystem to its pre-human state to provide a haven away from introduced predators for native birds, lizards, fish and insects.

One of New Zealand’s newest wildlife sanctuary projects, Orokonui is an example of a relatively new conservation tool - a pest-exclusion fence around a mainland sanctuary area. The 9km fence was completed in July 2007, and the area was then subjected to a pest eradication programme.

Maungatautari Ecological Island - a 15-minute drive from downtown Hamilton - is a mainland sanctuary for native wildlife and home to rare and endangered New Zealand birds including takahe, kiwi and kaka.

New Zealand’s biggest ecological restoration project has involved isolating 34sqkm of forested volcanic peak behind a 50km / 2m high pest-exclusion fence, eliminating animal pests, and restoring a healthy diversity of endangered flora and fauna to the forest. Kiwi were among the first arrivals brought into the newly predator-free zone, and the first kiwi chick hatched at Maungatautari in late 2007.

The sanctuary is surrounded by pastoral farmland, and bordered on two sides by the Waikato River. There are several public walkways.

The sanctuary includes a world famous gannet colony, and the vision is to bring back other coastal communities of land and sea birds, reptiles and invertebrates that once lived on the peninsula - a 2500ha headland that is now protected by a 10.6km predator fence that extends from coast to coast and an on-going pest control programme.

Reintroductions began in 2007 with forest birds such as tomtit, whitehead, rifleman and robin from other parts of Hawke’s Bay. Brown kiwi arrived in 2008 and there are now 50-plus kiwi including breeding pairs. Takahe was introduced in 2012 and four months later the first rare takahe chick hatched. Other populations include rare pateke / brown teal ducks, burrowing sea birds such as little blue penguin, grey faced and Cook’s petrel, variable oystercatcher, NZ dotterel and other shorebirds.

Spread over a 22-acre park with a natural fresh water spring, Rainbow Springs is a conservation and breeding haven for endangered New Zealand species such as kiwi and tuatara. The park offers a unique wildlife experience for visitors, who can see animals in their natural environment. There are 13 native or endemic animal and bird species on site, and over 90 native plant species.

At the Kiwi Encounter - New Zealand’s largest kiwi hatchery - visitors can see conservation in action as kiwi are hatched and nurtured before being released into the wild as mature birds. A kiwi chick’s chance of survival increases from five to almost 70% when it is hatched in captivity.

The park is open for day and night experiences including evening strolls when clever night time lighting enhances the evening experience.

Stewart Island - off the southern tip of the South Island - is New Zealand’s third island. It is renowned for its stunning beaches, native forests and nature retreats such as Ulva Island which is a seven-minute water taxi ride from the town of Oban.

Ulva has escaped the invasion of predators, making it a safe place for native birds to prosper and it is home to many varieties of birds, other fauna and flora. It is an open sanctuary with 4.5km of public walking trails, native forest and white sandy beaches.

The island is managed by the Department of Conservation, and there are several options for guided nature tours with passionate local guides. Highlights include inquisitive weka, chattering kaka, the chorus of native songbirds - tui, bellbird, fantail and grey warbler.

Pukaha Mount Bruce National Wildlife Centre, in the Wairarapa, pioneered captive breeding techniques for some of the New Zealand’s most threatened birds. It is now an internationally recognised facility for a number of threatened New Zealand bird species.

Restoration of the Pukaha forest began in 2001 and trapping has allowed the reintroduction of native species into the unfenced reserve. Kiwi, kokako and kaka have all bred successfully in the wild at Pukaha.

Visitors can enjoy guided tours of the forest, feed eels, see native birds being fed and tour the kiwi house and interactive gallery. Puhaka Mount Bruce is open every day of the year except Christmas Day. The sanctuary is near the town of Masterton, a two-hour drive from Wellington, and an hour from Palmerston North.

The Kapiti Island Nature Reserve, 5km off the west coast at the southern end of the North Island, is one New Zealand’s most important sites for bird recovery.

Species such as the kakariki / red-crowned parakeet, kaka, robin and bellbird have increased since the eradication of rats from the 1900-hectare island. The little spotted kiwi, now extinct from the mainland forests, also thrives on Kapiti Island.

Visitors must have a permit to land on Kapiti, and only 50 people are allowed to visit the island each day. Kapiti Island Nature Tours operates overnight visits to the island.

An inner city slice of native paradise within New Zealand's capital Wellington, Zealandia is acknowledged as one of Australasia’s top 25 ecological restoration projects.

The multi-million dollar project - the result of a 500-year vision to return part of Wellington to its pre-human state - has involved developing 252ha of native forest into a native wildlife haven behind an 8km predator-proof fence.

Native flora and fauna have been reintroduced including rare New Zealand tuatara reptiles, and flightless birds such as the weka and kiwi. The unique protected area has over 35km of tracks through regenerating forest.